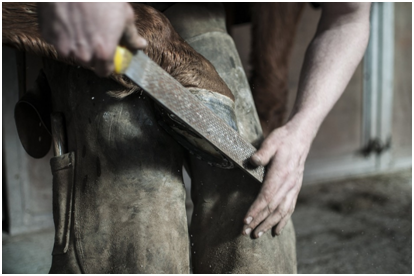 For many trainers and riders, behavioral issues in performance horses can make the training process feel like a frustrating chore. There’s nothing more irritating than when a horse decides to act like a rebellious teenager and make everything as difficult as possible. But when a horse doesn’t behave the way we want them to, we often tend to point fingers. We blame the horse, jumping to the conclusion that they’re behavioral issues are something they were born with. That they are inherently the “problem”. Why won’t they load into the trailer? Why won’t they stand still for a clipping? Why are they bucking when I ask for a gallop? Why aren’t they performing the way I want them to?

For horses, however, these aren’t problems—these are their own ways of coping with an uncomfortable situation. They can’t help it. It’s in their nature. Just as the human brain has a built-in “fight or flight” complex associated with split-second survival decisions, so too do horses.

This is very important to keep in mind as a rider. Whether we know it or not, what we see as a behavioral issue in a horse is very often a completely normal and instinctual horse response to a specific situation or interaction. This said, horses feeling uncomfortable are bound to “misbehave” simply because they do not feel safe in their environment.

One common example is trailer loading. Instinctually, horses tend to avoid dark, claustrophobic spaces. Pair this with our own training mistakes—such as poor timing in applying and releasing pressure when a horse moves, to “reassuring” a horse when they refuse to—behavioral “issues” should almost never be blamed completely on the horse.

It is important to take a step back and determine what exactly the issues are, how you (or whoever is training them) could potentially be contributing to the problem, and what steps need to be taken to avoid and circumvent the issue altogether. Once coming to terms with the fact that rarely, if ever, are the horse’s behavioral issues ever their fault alone, you’ll be able to further your connection with the horse and ultimately help them remain comfortable in their training environments.

Having perspective is key to success. Not only is reflecting on the ways we influence the behavior of a horse crucial to the training process, but it can also ensure good health, performance, welfare, and a rewarding partnership between you and the horse.