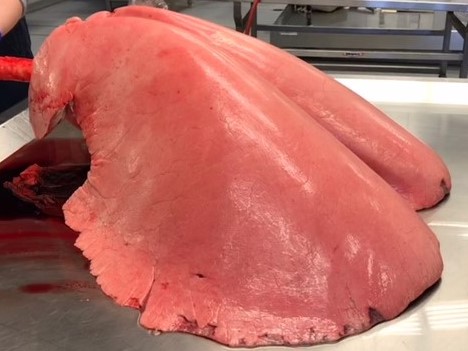 Take a quick moment to breathe in as deep as you possibly can. Let your lungs keep expanding until it becomes difficult to inhale any further. Once you've reached that point, let it out slowly and repeat (unless you're starting to feel lightheaded). Try to focus on the amount of air entering and exiting your lungs with each breath.

Now, take a few "normal" breaths. Again, notice how much air you are taking in and letting out. It should feel substantially less.

On average, humans at rest inhale roughly 0.5 liters of air with each tidal (or "normal") breath. When we breathe deeply, however, that number can increase nearly tenfold, allowing us to take in almost five liters of air with one breath.

Normally, though, we are only inhaling and exhaling somewhere around 7 to 8 liters of air each minute, which calculates to roughly 15 tidal breaths, or about one and a half deep breaths per minute.

But what about our horses?

While both human and horse lungs share a long list of similar characteristics, their capacities are quite distinct. At rest, an average horse draws in roughly five liters (approximately 1.3 gallons) of air with each tidal breath. With about 12 breaths per minute, that's nearly 60 liters (or about 16 gallons) of air moving into and out of their lungs every minute. If we go back to our breathing exercise, that would be roughly the same as us taking our deepest breath possible 12 times every minute.

For a healthy horse at rest, however, these 5-liter breaths are easily managed by their 55-liter lung capacity (compared to our 6-liter lung capacity). Although, when undergoing strenuous exercise, a horse's lungs need to work far harder and faster to move enough oxygen to the working muscles.

That said, the amount of air a horse takes in per minute can increase drastically, doubling from 5-liter breaths to 10-liter breaths, and a 12 BPM (breaths per minute) rate to upwards of 140 BPM. That's roughly 1,400 liters of air every minute! Or about 370 gallons (and that's a conservative value). For us to reach these same air-intake levels, we would need to breathe 2,800 times every minute, or about 280 deep breaths per minute.

What makes this even more extraordinary is that horses are obligate nasal breathers, meaning they can only breathe through their noses during exercise.

To give you a better understanding of this, let's try the breathing exercise again from earlier three times:

Notice how the rate in which you reach your full lung capacity changes? If done correctly, you should discover that inhaling with only your nose takes the longest amount of time before reaching full lung capacity. Now, imagine doing that 280 times every minute.

Seems impossible, right? Well, it is... For humans at least.

Horses, on the other hand, were built for strenuous work environments, meaning their lungs are able to endure far more stress than ours before giving out. However, that isn't to say horses don't have their own separate clipboard list of respiratory issues...

On our next post, we’ll delve into the relationship between obligate nose breathing, respiratory dysfunction, and the ways in which FLAIR® Equine Nasal Strips work to help horses breathe easier to perform more efficiently.