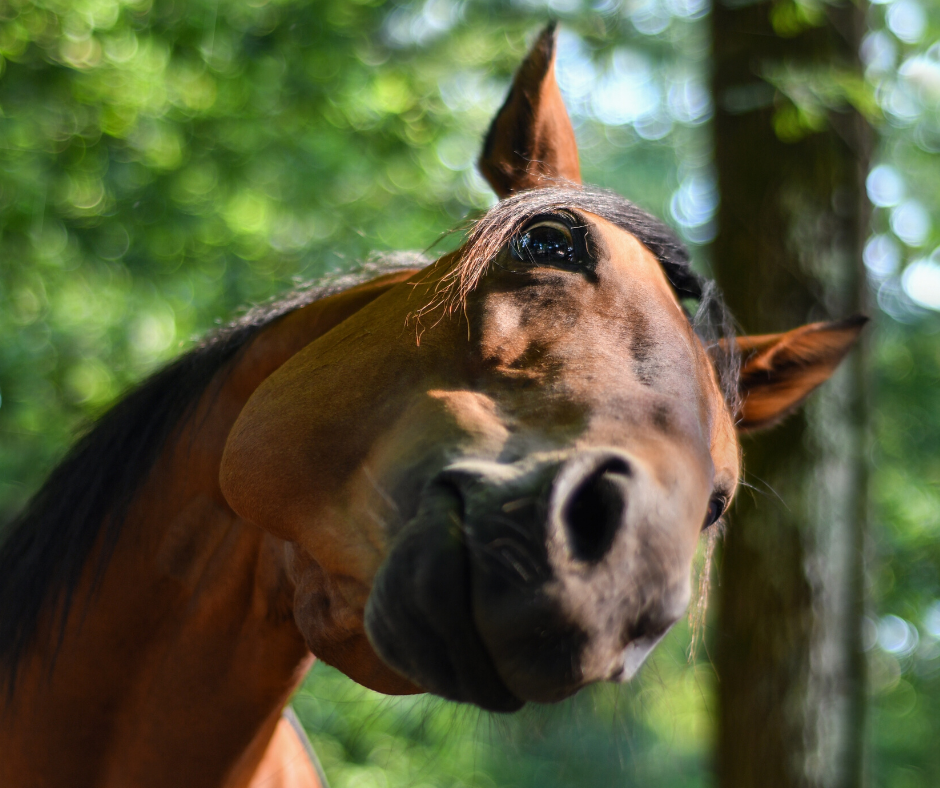 Does your horse shake his or her head excessively while under saddle? It is possible that “headshaking” could be the problem! Also known as trigeminal nerve-mediated headshaking, it is a disease that occurs spontaneously and consists of behavior changes such as throwing of the head in horses. Other presentations include snorting, rubbing of the muzzle, and sneezing... all without an apparent cause for the behavior.

There are, however, a long list of other issues that can cause a horse to shake his or her head besides trigeminal nerve-mediated headshaking. Some of these include dental disease, lameness, or even dislike of the bit used on a bridle.

If it is truly “headshaking”, the signs are caused by increased sensation, or a sharp burning pain in a nerve called the trigeminal nerve. The trigeminal nerve is one of many nerves that comes directly from the brain, called cranial nerves. The trigeminal nerve, in particular, exits the horse’s skull near the base of the ear and then travels all the way down to the muzzle. It allows the horse to feel sensation on their face and to contract the muscles used for chewing. Why this nerve becomes painful in horses with this disease is unknown, but it was recently discovered that the nerves are more easily excitable than the trigeminal nerves of normal horses.

Horses may exhibit these signs intermittently or continuously, and they may become worse with exercise. Signs are also seasonal in 60% of affected horses, with them worsening in Spring and early Summer in these cases. Interestingly enough, some horses exhibit headshaking behaviors only when it is sunny out!

Diagnosis of this disease is based on history, observation of the behavior, and elimination of all other potential causes of the head shaking behavior. A thorough physical and lameness exam, endoscopy, and radiographs are some of the many things that should be performed before a diagnosis can truly be made.

Due to our limited knowledge about why the trigeminal nerve is painful and “easily stimulated” in these horses, treatment of the disease can be difficult. Currently, there are no treatments that are completely safe, totally effective, and curative in all horses. Therefore, management of the clinical signs to a tolerable level is the goal for treatment. This makes the disease a “hot topic” of equine veterinary research at many institutions.

Which treatment seems to work the best is quite variable between horses. One of the first treatment methods tried is often a nose net. This is similar to a fly mask but hangs down over the muzzle from the noseband of the bridle. It is speculated that the net causes desensitization of the trigeminal nerve, via constant stimulation applied to that area. Magnesium supplementation is another simple management tool that can be tried in these horses. Magnesium is a mineral that can increase the time it takes for a nerve to become excited, making nerve firing (in this case the trigeminal nerve) less likely. Several medications have been studied and are often tried but have variable success. Since many of the medications used are not legal at horse shows, it is important to check with the governing body of the sport in which you compete before bringing them to a show.

There are also some newer, but more invasive treatment options, such as trigeminal nerve neuromodulation, also known as percutaneous electrical nerve stimulation, that are gaining ground. This procedure refers to physically modifying the electricity within the trigeminal nerve! To do this, electricity is sent through an electrode that is placed around the nerve on the horse’s face. It is thought that this “resets” the nerve into a normal firing pattern. Surgical options have also been reported for this disease, however again had variable results. Therefore, surgery is only tried in cases where medical management has failed.

In severe cases, the increased nerve sensation can be so intense that horses strike at their own nose with their forelimbs or rub their muzzle on stall doors causing trauma. In a small number of horses, the behaviors can become so intense that euthanasia is considered due to constant self-mutilation. On the other hand, some horses with this disease spontaneously go into remission in months or years after first being affected. Miraculously, many of these horses never experience clinical signs again!

Headshaking is a fascinating disease, so it is not surprising that there is ongoing research being done on it all the time. If your horse keeps nodding his head up and down, he is saying “yes, let’s look into this a little further!”.