Unfortunately, as you may have experienced… if you own a horse, at some point they are likely to be lame and need a veterinary lameness exam. But what do veterinarians do in a lameness exam … and WHAT IN THE WORLD are they looking at? 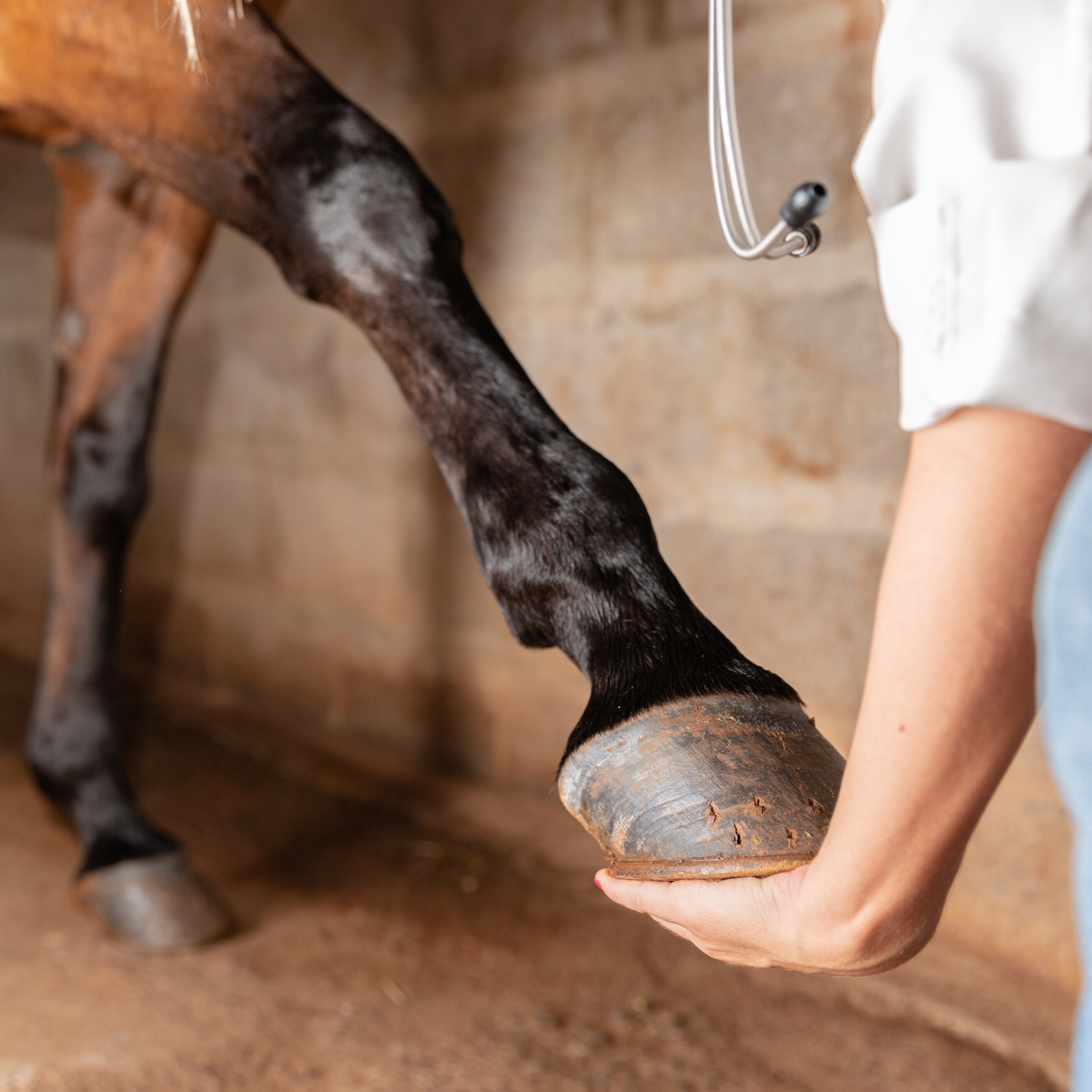 A lameness exam is a systematic process which simply put, establishes if the horse is experiencing pain, and where the pain is coming from. This process is often referred to as “localization” of the lameness, as it tries to find the exact “location” of the pain.

Getting to the root cause of a horse’s lameness is similar to a mechanic trying to figure out why your car is leaking oil, or why it is “making that horrible sound”. First the mechanic inspects of the vehicle, then they run “diagnostics” to try to diagnose the specific issue, and then hopefully they make a plan of action for fixing it.

A good lameness exam starts with thorough palpation of every aspect of the horse, often called a “musculoskeletal exam”. The veterinarian feels all parts of the horse and looks for heat, swelling, pain to the touch, and decreased range of motion, among other things. Before even watching the horse move, they may already have a suspicion of regions that could be causing the horse’s discomfort, based on what they have felt.

The “dynamic exam” comes next, in which the dynamic movement of the horse is evaluated. Both a straight line and circles are evaluated in a thorough exam, as some sources of lameness are seen in one situation but not the other. It is common to have a horse look sound (not lame) on a straight line and then lame on a circle, or even look great on a circle to one direction but not the other direction! Different severities and regions of pain can often be seen at different gaits of the horse, so the walk, trot, and canter, is frequently evaluated. How a horse looks on hard ground versus soft ground also can give clues to the veterinarian as to where the source of lameness is. A lameness grade, or the severity of the lameness, is then established based on this part of the exam.

“Flexion tests” usually come next. These are a type of “stress test” in which a specific part of the horse is stressed, under flexion, and then the horse is evaluated again. If a limb gets worse after a flexion, it is likely a source of discomfort. Each flexion is then compared subjectively to the other flexions, and graded, to see which made the greatest impact on the horse’s discomfort. Hoof testing is a similar kind of “stress test”, but instead of causing stress by flexing, a specific region on the hoof is squeezed to cause stress and potentially pain. These tests all add to the subjective evidence a veterinarian has towards their suspicions on the source of lameness.

In order to try to prove suspicions, nerve blocks typically follow. A nerve block is when a drug that has a numbing effect, similar to lidocaine, is injected on top of a nerve to make it no longer feel sensation, just like at the dentist! In theory, the numbing then occurs from the location of the injection and includes everything down the limb or nerve. This injection location serves as a road block in which the sensation from anywhere below can no longer pass up through this point.

After a nerve block is placed, the horse is watched while moving again, and if an improvement in the lameness grade is seen, somewhere from that road block down is a source of pain. If no improvement is seen, a block higher up the nerve road is placed.

Nerve blocking is also called “diagnostic analgesia” because the level up the limb where the pain was taken away (analgesia) - and the horse became less lame is “diagnostic”.

Once a location of pain is found, the region can be looked into closer through “diagnostic imaging”. Radiographs, ultrasound, or more advanced ways of looking into the region can be performed with added confidence, and hopefully a treatable source of pain can be found.

In order to catch subtle lameness and prevent worsening, horses that are not thought of as lame by their riders or trainers, are often evaluated routinely by veterinarians on a set schedule. This allows a “proactive” approach to a horse’s soundness and is the best opportunity for the horse to show us where they hurt before it gets worse. Because as always… it’s about the horse!