Lung bleeding in horses, also known as Exercise Induced Pulmonary Hemorrhage (EIPH), is a silent injury that can go undetected by trainers and riders because it occurs deep within the lungs. EIPH in horses occurs when fragile pulmonary blood vessels in the lungs rupture during exercise. Lung bleeding can be detected by endoscopic examination. During the scoping, a long thin tube with a camera on the end is passed through the horse to view the upper airway and trachea. Lung washes and bronchoalveolar lavage (“BAL”) are the most accurate method to detect lung bleeding. Blood in the lungs and lower airways has been shown to be an irritant that leads to further lung bleeding in horses.

Numerous studies show that essentially all horses are affected by some degree of EIPH during intensive exercise. Only 5% of horses show blood at the nostrils.

FLAIR® Strips are proven to reduce resistance to breathing which puts less stress on the pulmonary blood vessels, resulting in fewer ruptured blood vessels in the lungs. Whether in training or in competition, using FLAIR Strips during intensive exercise reduces damage that can occur in the lungs and supports optimal respiratory health. 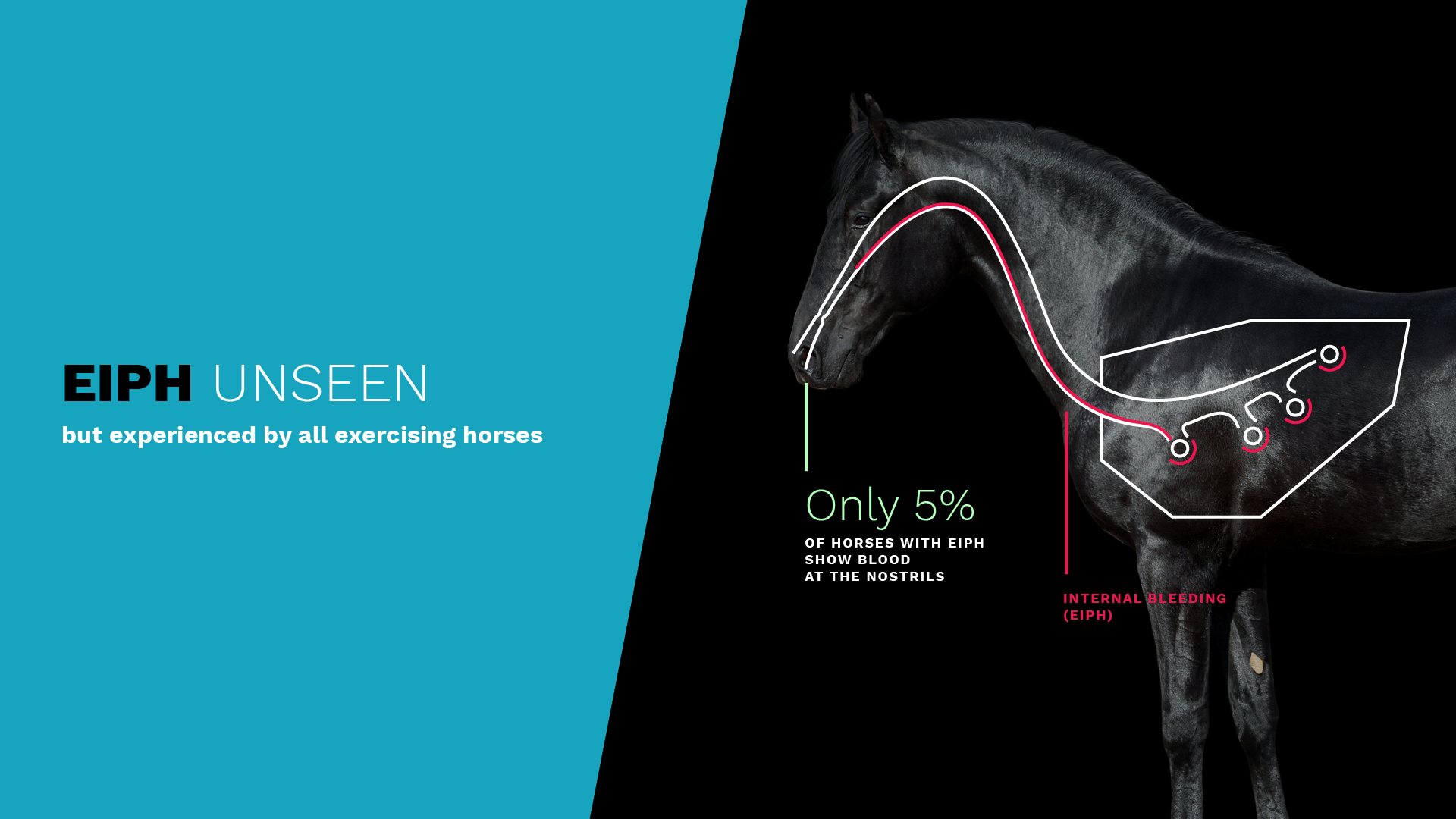 It's common for many low and intermediate-level bleeders to show no visible signs of lung bleeding in horses. However, symptoms you may notice include: 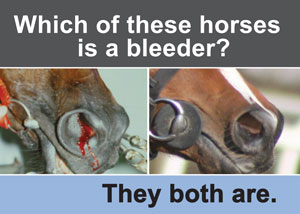 There's potential for more damage if a horse:

Each incidence of EIPH in horses contributes to scar tissue formation within the lungs and potentially future bleeding episodes. The lung damage from repeated episodes of EIPH can shorten a horse's competitive career.

Horses don't have to gallop to bleed. Research in Japan shows that horses only cantering at speeds of up to 20 mph (a very slow canter for a racehorse) all had damage to their lungs as a result of broken blood vessels. Some studies report that lung bleeding in horses can even occur when doing mild exercise such as trotting on a treadmill.

Each time a horse does more than a slow canter, some blood vessels in the lung are broken. At first, this damage only affects a small area at the top back part of the lung, but with repeated cantering, galloping and racing, the damage accumulates and affects more of the lung. The severity and frequency of lung bleeding in horses observed by scoping after exercise or racing almost always increase with age.

LUNG DAMAGE DUE TO EIPH IN HORSES

Scar tissue forms in the lungs each time bleeding occurs. The blood vessels that break in the lung are almost always the blood vessels of the pulmonary circulation. When the vessels rupture, they may become blocked or not function normally. If the vessels are repaired, they may become stiff since scar tissue is not as flexible as normal healthy lung tissue. Damaged lung tissue, even if it is repaired, doesn’t function as well, leaving the horse’s lung capacity and function reduced.

The lung is a limiting factor for performance in horses; so, even small losses of lung function can have significant, unfavorable effects on performance and shorten a horse's competitive career.

Reducing bleeding not only helps a horse perform better in the short term, but may also help long term by reducing the possibility of inflammatory airway disease and chronic lung damage due to repeated bleeding episodes. 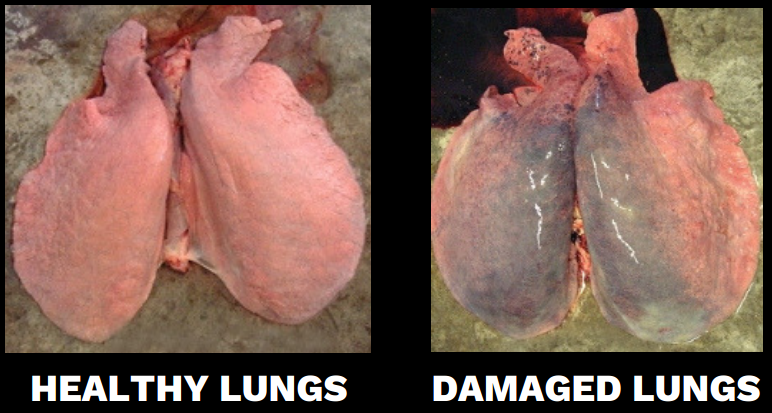 WHY LUNG BLEEDING HAPPENS IN HORSES

During intense exercise, a horse breathes more than 500 gallons of air into its lungs every minute.

Two major things happen when a horse begins to exercise:

During inspiration, the horse's stride and the diaphragm create a strong vacuum or negative pressure. This brings the air through the nasal passages into the alveoli (air sacs) deep in the lungs where oxygen is transferred from the lungs into the blood through small blood vessels known as pulmonary capillaries.

The strong negative pressure necessary to inhale this amount of air (500 gallons per minute) creates a strong suction force on the alveoli. The alveoli are separated from the small blood vessels in the lungs (pulmonary capillaries) by a thin membrane called the pulmonary capillary membrane. This thin, fragile membrane is very efficient at transporting oxygen and removing waste gases and carbon dioxide between the alveoli and pulmonary capillaries because it is only about 1/100th the thickness of a human hair. 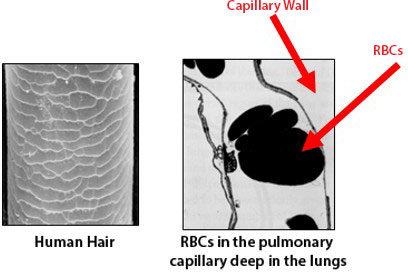 Warm-ups are important because they help ensure that more red blood cells are available during competition.

Increased cardiac output is achieved in part through dramatic increases in heart rate. During intense exercise, a horse’s heart rate can increase to over 220 beats per minute (bpm) to circulate more than 75 gallons of blood through the lungs per minute. Overall, these forces quadruple the blood pressure within the lungs from its resting pressure. This means there's a significantly higher positive pressure in the pulmonary capillaries during exercise than during rest.

During exercise, when these opposing forces are applied across the fragile pulmonary capillary membrane, the membrane can rupture and spill blood out of the blood vessels into the alveoli, causing Exercise Induced Pulmonary Hemorrhage. 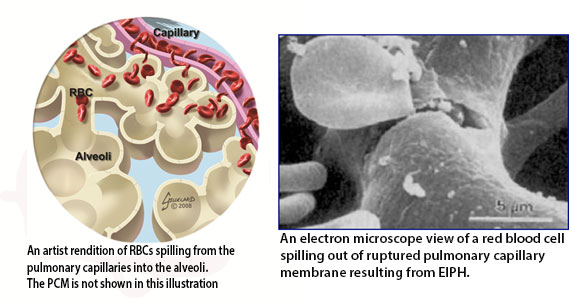 Conditions like inflammatory airway disease, bronchitis and other inflammatory or infectious conditions can cause the pulmonary capillary membrane to become more fragile, increasing the likelihood of bleeding.

PRESSURE CHANGES IN THE LUNGS

FLAIR Strips gently support the nasal passage to reduce soft tissue collapse caused by the narrowing of airways during exercise and make it easier for horses to pull air through the nose during exercise. Because resistance is reduced, the strong negative pressure on the alveoli side is reduced which helps reduce the pressure difference so the pulmonary capillary membrane is less likely to rupture.

While nothing has been shown to stop bleeding, two things have been proven to reduce bleeding:

FLAIR Strips
FLAIR Strips are drug-free and have been proven to be as effective as Lasix in reducing lung bleeding during high intensity exercise. The Strips reduce bleeding by normalizing pressure across the pulmonary capillary membrane. Studies have shown that horses affected by EIPH that wear a FLAIR Strip have fewer blood cells in their airways after exercise, compared to the same horses not wearing a Strip. The FLAIR Strip is a mechanical device, so it will be equally as effective every time it's used and can be used with every hard workout.

Drug Furosemide (Salix, formerly Lasix)
The drug is a potent diuretic that reduces blood volume and pulmonary vascular pressures – it does not normalize airflow. Furosemide reduces blood volume by increasing urine production, which consequently reduces fluid in the tissues and organs of the body. Side effects include dehydration, weight loss and electrolyte loss, particularly potassium. The drug has been shown to reduce EIPH inn horses. However, a recent study has shown that the diuretic effect is reduced upon repeat administration. Further studies are needed to determine whether furosemide’s efficacy in reducing EIPH is diminished upon repeated use.