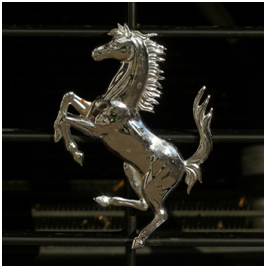 What’s the difference between a performance horse and a race car? Well, aside from the obvious fact that one is living, and one is not, when you look at both through a conceptual lens, you’d see that they are actually quite similar. After all, there’s a reason race cars are gauged in horsepower.

But now let’s take a look under the hood.

Beneath the surface, a horse during exercise essentially goes into overdrive. Depending on the intensity and duration of the activity, a horse’s respiratory rate can hop up nearly tenfold, increasing from 12 to 20 breaths per minute (at rest) to as high as 180 breaths per minute during exercise. With this acute fluctuation in a horse’s breathing pattern, their own internal “engines” need to be running with optimal efficiency in order to keep up with the stress of their physically demanding competitive environments.

Within a NASCAR race car, engines are designed to have as little resistance as possible. Intake and exhaust inputs and outputs are tuned and tested to provide maximum efficiency at certain engine speeds. In order to achieve this, every gear and gizmo is designed to have very low resistance, allowing gases to flow through the pipes without any obstructions. This gives the driver the ability to push the vehicle harder without having to worry about any sort of repercussions such as engine failure or overheating. Learn more on how to keep your horse from overheating.

Like the carburetors of a well-oiled machine—bringing in high volumes of air and fuel every second—the nostrils and nasal passages of a performance horse are vital to their respiratory functioning as they are obligate nasal breathers (meaning they must breathe through their nostrils). However, this is problematic as the nostrils, in addition to the larynx, are the two narrowest pathways in a horse’s respiratory system tract as well as the most likely to deliver resistance to incoming air.

FLAIR® Equine Nasal Strips are clinically proven to free up this resistance, giving horses the ability to breathe easier, conserve energy, recover faster, and most importantly, perform safely and optimally. Read more about how you can keep your horse safe on race day. Or, learn more about the science behind FLAIR Strips and how they can benefit you and your performance horse.